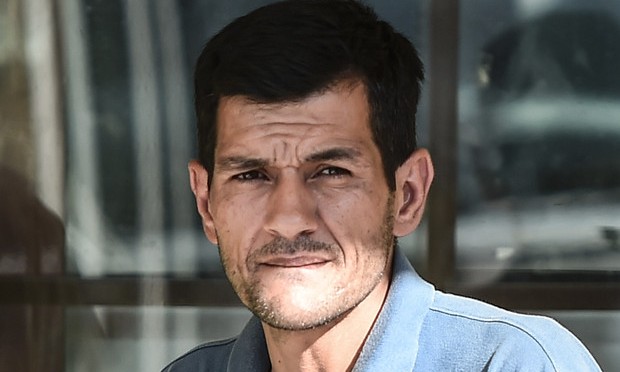 Abdullah Kurdi’s story is made-up. But his lies are now being used and rewarded by the media in full blown propaganda, while pressuring policies to force Europe to take in more economic migrants who have never experienced a war zone. The dead toddler pornography is a dream-come true PR campaign serving ISIS and their overwhelming Muslim supporters.

Abdullah was never on that boat to watch his wife and children drown. That’s why he was the only survivor. The first time he learned of their death was from the hospital after the photos of his young son was circulating in the media. Listen to all the contradictions and holes in his story.

This was an attempt to send his wife and children into Europe before his own arrival to apply for refugee status as a lone woman with children, while they never even lived in a war zone.

After leaving from what they say was a war zone (Syria is huge and the entire country is not a war zone) the Kurdi family was given FREE housing in Turkey and had been there for THREE years. Abdullah Kurdi was not in any war zone. He was safe, he had food, he had over $4,400 in cash, which is over 13,000 Turkish Lira – so why did he leave?

This is what he told the press initially, as reported in the Guardian yesterday:

“I took over and started steering. The waves were so high and the boat flipped. I took my wife and my kids in my arms and I realised they were all dead,” he told AP.

Let’s look at all the details of his story.

The report according to Abdullah’s own words is that he lived in Turkey for three years and prior to that he had lived in Damascus. His sister makes the story even more confusing saying that Abdullah was a barber originally from Damascus, who fled from Kobani to Turkey but “dreamed of a future in Canada” for his family. Was he living in Damascus or Kobani? Kobani is over 500 kms from Damascus.

After “fleeing” from “war zone” Kobani he now wants to return to Kobani to attend — a funeral. Huh…? So he’s safe to fly back by plane to Kobani and attend a funeral. And guess what? ISIS was not even in Kobani when Kurdi claims his family “fled” from ISIS.

ISIS was not in Damascus either three years ago when Kurdi claims he lived there. ISIS entered only a small rural part of northern Damascus last year and targeted a remote refugee camp with “Palestinians” earlier in 2015 and were pushed out. ISIS is present ina quarter of the country in Northern Syria, not in the South.

What we’re reading here is a story about relatives serving as people smugglers to other relatives living in Turkey. This is what happened with Kurdi. His own family in Canada are his people smugglers trying to come up with ways for him to illegally fraud the immigration system, and make up stories about threats that he never experienced.

The father, Abdullah Kurdi, is giving different stories depending on who he is talking to. His sister Fatima gave an account of a phone conversation with her brother Abdullah that is reported in the DailyMail. That story is different to the one Abdullah Kurdi gave to the press.

Listen to the bits here from DailyMail:

Reliving the moments after the dinghy capsized and the Mediterranean waves crashed around them, Abdullah Kurdi described how he’d pleaded with his sons to keep breathing, telling them he didn’t want them to die.

It was only when he looked down at their faces and saw blood in Aylan’s eyes that he realised the boys had died in his arms and he was forced to let them go.

Looking around in the water, he spotted the body of his wife Rehan ‘floating like a balloon’. She had also drowned.

…and the version his sister Fatima gives, the DailyMail, is here:

Yesterday his sister Tima – who is also known as Fatima – revealed how the grief-stricken father had relived the final moments of his boys’ lives in a phone conversation she’d had with him.

‘When a bigger wave came and flipped the boat upside down, Abdullah right away caught both his kids and tried so hard with all the power he had to keep them up from the water, screaming, ‘Breathe, breathe, I don’t want you to die!’,’ she said.

‘In his left arm was Galip and he saw he was dead and he told me, ‘I had to let him go’,’ she added.

Then he looked at Aylan and could see blood from his eyes, so he closed them and said, ‘rest in peace my son,’ she went on to say.

She said that while he was still in the water, Abdullah saw his wife’s dead body floating in the water ‘like a balloon’, causing him to struggle to recognise her.

Sobbing uncontrollably Abdullah yesterday recalled his terror when the flimsy and overcrowded dinghy overturned, causing the night to be pierced by the screams of his fellow Syrian refugees as he clung on to his wife.

‘I was holding her, but my children slipped through my hands,’ he said.

‘We tried to cling to the boat, but it was deflating. It was dark and everyone was screaming. I could not hear the voices of my children and my wife.’

The wife was ‘a balloon’ in less than three hours ? The rate of decay to a dead body in water is not instant. Obviously Abdullah had no idea how dead people in water decay and he knew at some point they would bloat, so he described his wife in a condition of decay that takes days to mature. Here from The Forensic Library is a description:

Bloated (2-6 days)
This stage of decomposition includes the first visible signs of decay, namely the inflation of the abdomen due to a build-up of various gases produced by bacteria inside the cadaver. This bloating is particularly visible around the tongue and eyes as the build-up of gases cause them to protrude. The skin may exhibit a certain colour change, taking on a marbled appearance due to the transformation of haemoglobin in the blood into other pigments.

Although Abdullah claims to have seen the dead bodies of his two children and his wife after their boat was hit by two large waves, his story then changes and he claims that he made it safely to the beach. He now assumed that the wife, who had laid bloated and drowned, and the two small boys who he had seen drowned right in front of him and he knew were dead,  had managed somehow to make it alive to the beach. He could not find them on the beach so he assumed they had “become scared and ran away”. He now sees these dead people nowhere. But he only finds the “truth” about their death after going to the hospital where their bodies were kept.
Can someone explain to us how dead bodies run away? In other words, he only knew they were dead after the pictures of his son started showing up in the media reports. Here’s his own account reported in the DailyMail:

Over the following three hellish hours in the water, [in the short time his wife turned onto a ‘balloon’ – a sign of decomposing that only occurs 2-6 days later] Mr Kurdi battled for survival, while frantically searching for his sons and his wife, who had also been pulled from his reach. He found one childbut it was too late – the boy had drowned.

‘My first son died from the high waves,’ he said. ‘I was obliged to leave him to save the other one. I tried to swim to the beach by following the lights.

‘I looked for my wife and child on the beach but couldn’t find them. I thought they had got scared and had run away and I went back to Bodrum.

‘When they did not come to our meeting point I went to the hospital and learned the bitter truth.’ (How can he learn the bitter truth when he claimed earlier that he saw them die and tried to save one of the sons, who had already drowned? He then attempted to save the second one who was dead with bloodied eyes, while finding his wife floating and bloated in the water. How can dead people like this run away?)

The barber had paid people smugglers £2,900 over the course of three attempts to reach Greece from a refugee camp in Turkey.

But he has told friends he wished he had also drowned to be spared a lifetime of self-recrimination over the family’s desperate gamble for a better life.

Pictures of Aylan and Galip have been shared by social networkers around the world, prompting calls for politicians to do more for fleeing Syrians.

So you can hear that we have completely different stories coming from Abdullah that don’t even match.

He doesn’t even know what exactly happened. This man was never on that boat and never watched his wife and children drown. That is why he was the only survivor without any injuries and without any need for medical help, although he claims to have undergone a violent and desperate situation for over three hours where everyone else drowned. He is lying and making the story up. We’ve worked long enough with these humanitarian issues to recognize a tall tale. Basically, the fragmented and fabricated story indicates to us that the wife and children were sent to arrive before him as a lone mother and children (easier to get accepted). Of course, this advice would come from his own family already living in Canada and parts of Europe who know more about the dhimmitude of Europe, now serving as long-distance human smugglers. The wife has clearly been told to go first, get her refugee case handled, and then help to get him entry at a later date where he can join them with a forged passport after the wife is already settled.

It’s all fraud. All of this explains his dry crocodile tears. No wonder his sister Fatima was crying more than he brother who lost his entire family. She had guilt that their suggestions and strategies caused the death of a  woman who could not swim and was afraid, and the death of three small children. They’re intentionally frauding the system. And now they also push propaganda to open the floodgates to the rest of these fraudsters.

It is however, noteworthy to hear this comment coming from Abdullah Kurdi that he does not mind sacrificing his wife and children for his agenda, according to his sister Fatima in Canada:

‘Of course it makes me sad that it’s taken this [tragedy] to make people realise what is going on,’ she said, adding: ‘Abdullah said, its ok if it has to be my kids and my wife who wake up the world, its ok. If it’s been written to happen that way, it was supposed to happen.’

And the Turkish people smuggler Turkish President Tayyip Erdogan responded to the deaths in his country’s waters by saying: “European countries, which have turned the Mediterranean, the cradle of the world’s oldest civilizations, into a cemetery for refugees, shares the sin for every refugee who loses their life.”