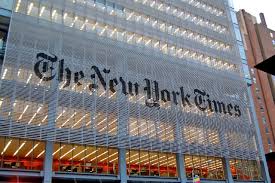 A spokesperson for Egypt’s Ministry of Foreign Affairs attacked the New York Times on Friday for publishing an article that it said evokes sympathy for smugglers in the Gaza Strip and gives legitimacy to their tactics.

The piece in question was published by the New York Times on Wednesday and was titled, “As Egypt Floods Gaza Tunnels, Smugglers Fear an End to Their Trade.” The article profiles Gaza smugglers who are fearful that efforts by the Egyptian government to limit illegal smuggling across the Gaza-Sinai border could “spell doom for their trade.” The first paragraph of the article includes a quote from a worried smuggler who said, “This is the end for us.”

Writing on the Foreign Ministry’s blog, spokesperson Ahmed Abu Zeid said the article is “audaciously intended” to leave the reader sympathetic to the smugglers. By referring to their illegal activity as “trade,” the New York Times is “trying to obfuscate reality, giving a veneer of legitimacy to what is essentially an illegal practice condemned by international and domestic law,” Zeid wrote.

He wondered if the New York Times is unaware that it is every country’s “sovereign prerogative” and “international duty” to defend and secure its borders against illegal smuggling.

“What if that smuggling was taking place through clandestine, hidden, underground tunnels that can neither be monitored nor controlled?” he asked. “Would that not make the issue all the more urgent?”

Zeid also blasted the Times for attempting to frame Egypt as responsible for the decline of Gaza’s economy, and the rise of unemployment, poverty and constant power cuts. The accusations are “nothing short of absurd,” he said, adding that advocating for an “underground, illicit economy” is not the way to help Palestinians.

Zeid said the article is “deliberately oblivious” to the fact that the Gaza tunnels pose a threat to Egypt’s national security, because they help fuel and supply terrorists in the Sinai.

“After all, if commodities can be smuggled undetected across a border, what is to stop weapons, human beings and historical and cultural artifacts from being smuggled in the same way?” he asked. “There is plenty of evidence that narcotics and human traffickers have repeatedly exploited the tunnels. Convicted criminals are known to have escaped through them. Weapons and firearms are constantly being smuggled across them… Is this the kind of lawlessness the NYTis advocating?”

In conclusion, Zeid accused the Times of biased reporting, intent on “discrediting Egypt’s image in any possible way, for any possible reason.” He charged the publication with misleading and deceiving its readership, a feature he believes is prominent in all its reportage on Egypt.

“This time,” he wrote, “the paper has gone a step further, advocating what would amount to a situation of lawlessness and chaos.”